A diverse representation of religious groups, scholars, and attorneys for advocacy groups on the left and right met under the auspices of The American Assembly March 23-26, 2000 in New York to formulate a consensus on religion in America’s public life. Wayne Jacobsen, President of BridgeBuilders, served as a discussion leader and part of the drafting team for the Assembly.

The American Assembly, an affiliate of Columbia University, was founded by President Dwight D. Eisenhower in 1950 “to illuminate issues of public policy.” The Assembly convenes authorities from relevant constituencies on critical national issues, both domestic and foreign, to reach the highest possible consensus and to distribute their recommendations to 20,000 decision-makers at all levels of Federal and state government. This was the 96th meeting of the Assembly and the first to cover religious issues.

The fact that a group of 67 people as politically and religiously diverse as this find common ground on how people of faith engage American society, it should give us all hope that disagreements of a religious nature do not have to degenerate into hopeless conflict and paralysis. Their final statement offers a critical guide for our society to navigate the so-called culture wars and made some specific recommendations for educational leaders throughout the U.S.: 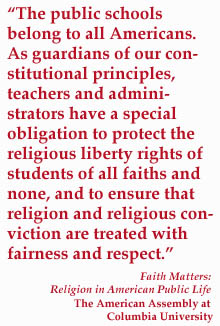 The complete document, Faith Matters: Religion in American Public Life, and a list of the participants can be found at the American Assembly web site. These recommendations would go a long ways to disarming the kind of conflict that disrupts communities and paralyzes local school districts.

Back to Resource Page